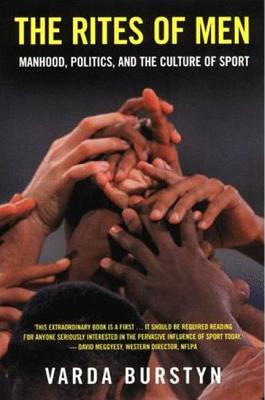 The Rites of Men : Manhood, Politics, and the Culture of Sport

Appears unread, no creasing to spine, internally unmarked, sl. spotting upper fore-edges. "Combines an historical analysis of the role of sport in the making of white masculinity with a discussion of sexuality, gender, and homoeroticism."

It gathers more spectators on a global basis than any other activity today, yet sport is widely regarded as being outside dominant political and social systems. Varda Burstyn challenges this view, showing not only that sport generates an elitist, masculinist account of power and social order, but that it is central to the constitution of political power in contemporary life.

Burstyn begins by describing the emergence of sport as a masculinist secular religion by the close of the last century. Today, she argues, masculine dominance continues to be constructed and promoted by the multibillion-dollar nexus that has harnessed sport as the consummate sales agent. She goes on to show that the super-aggressive ideal of manhood, as practised, modelled, and animated through the culture of sport, has profound social and political consequences.

Combining some of the best insights of feminist theory with the perspectives of history, political science, economics, psychology, sociology, and cultural criticism, this book brings a new dimension to sport as a subject for serious scholarship.

Title: The Rites of Men : Manhood, Politics, and the Culture of Sport

The Rites of Men : Manhood, Politics, and the Culture of Sport